POLACCA, Ariz. (AP) – Hopi presidential candidates easily switch from tribal language to English as they plead for votes in a high school auditorium.

The audience is a mix of fluent speakers, Hopi whose language and culture have been attacked in assimilation-oriented boarding schools, Hopi who fear being laughed at if they stumble over Hopi words, and others who want to learn.

To be in the shoes of President Tim Nuvangyaoma or his challenger, David Talayumptewa, the Hopi must be able to speak and understand the Hopi. The rule of the tribal constitution was relaxed in 2017 over language proficiency, and Nuvangyaoma is pushing to eliminate any language requirements for the leadership position on the 2,500 square mile (6,475 square kilometer) reserve.

He argues that rejecting it would attract Hopi youth who have been told to leave their homeland, get an education, and return to help their people with skills in technology, engineering, law and hydrology, but cannot speak Hopi. The reserve is made up of 12 villages in the high desert of Arizona and is home to about half of the 14,000 registered Hopis. It is completely surrounded by the much larger Navajo Nation.

â€œWe are never going to ignore our culture and traditions, but we are in 2021 now,â€ Nuvangyaoma said in an interview.

Talayumptewa retorts that the problem is not with the constitution but with the leadership style of Nuvangyaoma, and the solution is to foster a resurgence of the language that defines the Hopi.

â€œThat’s his bet,â€ Talayumptewa said of the Nuvangyaoma push. â€œIt will be a problem during the elections. I’m not backing down, and I guess that’s my bet.

The discussion of the role of language in tribal politics inevitably turns into a discussion of cultural preservation and identity. The Hopi, like other tribes, fought to retain their language as the US government attempted to eradicate their culture and assimilate them into white society.

A similar issue drew attention to the Navajo Nation several years ago, when a candidate for the largest Native American reservation was disqualified after refusing to be their first presidential hopeful to take an aptitude test. Voters relaxed the requirements, essentially eliminating the need for key leaders to be fluent in Navajo.

The principal chief of the Cherokee Nation of Oklahoma, the largest tribe in the United States, is not required to speak Cherokee but must meet other qualifications, said tribe spokeswoman Julie Hubbard.

The Hopi reservation has tended to make English the dominant language for decades, as fewer parents speak Hopi at home, said Dr. Sheilah Nicholas, or QÃ¶tsahonmana, a professor at the University of Arizona in the Hopi village. by Songoopavi. A US Census Bureau study published in 2011 found that less than half a million people aged 5 and over spoke a Native American language at home.

A small segment of Hopis who live in a community at the base of First Mesa speak Tewa, a language more common among the Pueblo tribes along the Rio Grande in New Mexico.

The Hopi sense of identity is vulnerable when the Hopi live in the remote reserve, are removed from religious and cultural practices such as dry farming and ceremonies in the kiva, and cannot speak the language that is part of a spiritual alliance with the creator, Maasaw, said QÃ¶tsahonmana.

But focusing only on the ability to speak erases other forms of language, she said.

â€œThere are songs, there are teachings, there are prayers,â€ QÃ¶tsahonmana said. â€œAll of this, if you are engaged and involved in these, you become Hopi. “

Bernita Duwahoyeoma, whose Hopi name is Siwivensi, highlighted the sacrifices made over the years to protect the language and culture of the tribe.

Nineteen Hopi men were incarcerated at Alcatraz, off the coast of San Francisco, in 1865 after refusing to send Hopi children to residential school. In 1701, the Hopi who resisted the Spanish efforts to convert them to Christianity destroyed one of their own villages to ensure the continuation of Hopi practices. Hopi men, women and children have died, Siwivensi said.

â€œOur whole culture is at stake,â€ she said. â€œJust something as simple as the language, and here we are as a people. And I wonder which of these candidates is going to be sincere and listen to what people say with their hearts? “

The winner of Thursday’s non-partisan election alone cannot make changes to the Hopi constitution of 1934, but can make a proposal through the Tribal Council and put it to a vote.

Leilani Nish, who volunteered as a moderator for the debate and does not yet speak Hopi, said she would welcome a change to involve young people.

â€œIt’s not a free pass,â€ said the 19-year-old student. â€œAnyone who is there, no matter what, should be able to learn the language. That way, when you talk (to) and greet people, you can greet them in Hopi. It’s just more respectful.

Nuvangyaoma, 50, was a new face in Hopi politics before being elected to a four-year term. He was a firefighter, worked in finance, volunteered for the Hopi radio station and served four terms in prison for aggravated drunk driving, experiences which he said helped him get in touch with Hopis who struggle with drug addiction.

During Saturday’s debate, he repeatedly alluded to constitutional reform to give citizens a greater voice in tribal government, create a separation of powers and modernize the document.

Talayumptewa, a 71-year-old retired United States Bureau of Education official, championed the creation of a single school district on the reservation. He said tribal government needs to partner with small businesses and private industries, and re-engage with language and culture.

Nuvangyaoma and Talayumptewa answered questions about public safety, tribal sovereignty, tourism, flooding and illegal dumping of garbage during the debate at Polacca school which allowed the Hopi to go to high school in their own reserve. A Hopi word at the entrance – nahongvita – encourages students to dig deep and stay strong.

The scene was adorned with gourds, baskets and a colorful painting with stalks of corn and Hopi in traditional dress.

The candidates presented themselves in Hopi but spoke mainly in English. Towards the end of the two-hour debate, Talayumptewa presented his plan to revitalize the language, which includes immersion programs. Nuvangyaoma dismissed the speech as an empty promise, saying Talayumptewa had plenty of time to embrace the change as a board member for three terms on the education committee.

Deidra Honyumptewa, 47, said she left the debate with hope. She and her family recently moved from the Phoenix area to the village of Tewa, but do not speak Hopi or Tewa.

â€œThere are a lot of highly educated people my age who are ready to get down to business and do what we need to do for our tribe, but it’s a hindrance for us,â€ she said.

Fonseca is a member of the AP Race and Ethnicity team. Follow her on Twitter at https://twitter.com/FonsecaAP

Hopi President Tim Nuvangyaoma addresses an audience gathered for a candidate debate at the Tribe’s High School in Polacca, Ariz. On Saturday, November 6, 2021. Nuvangyaoma takes on David Talayumptewa, seated on stage, in the election of the Thursday 11 November. , 2021. (AP Photo / Felicia Fonseca) 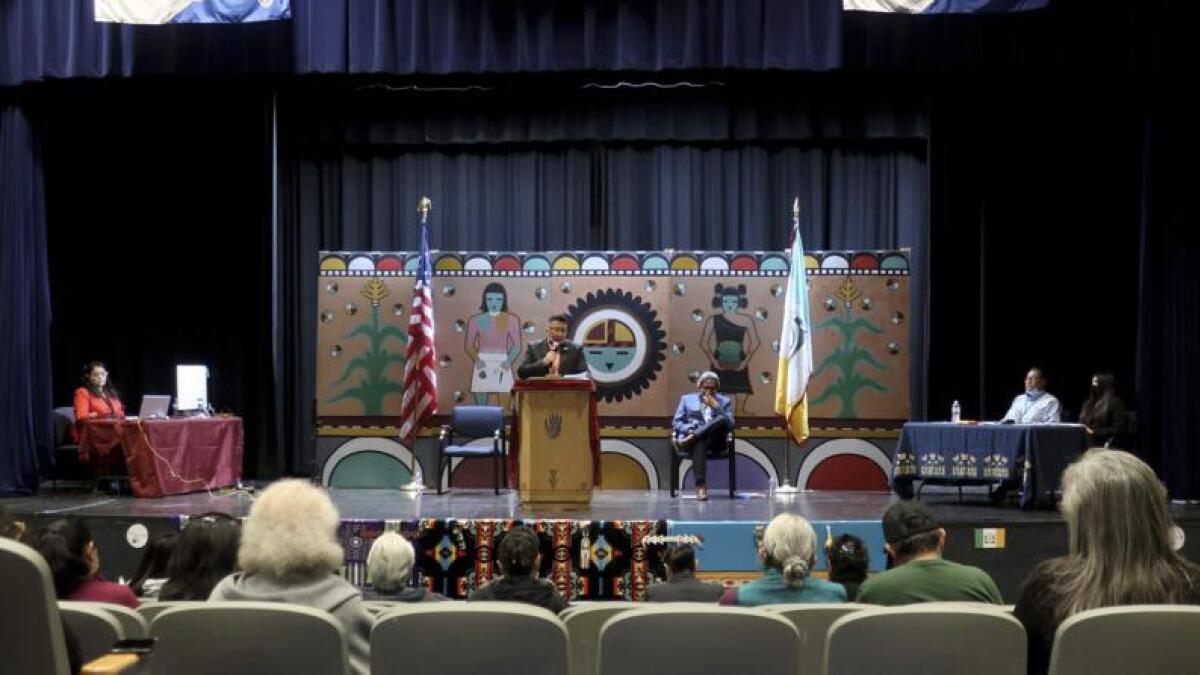 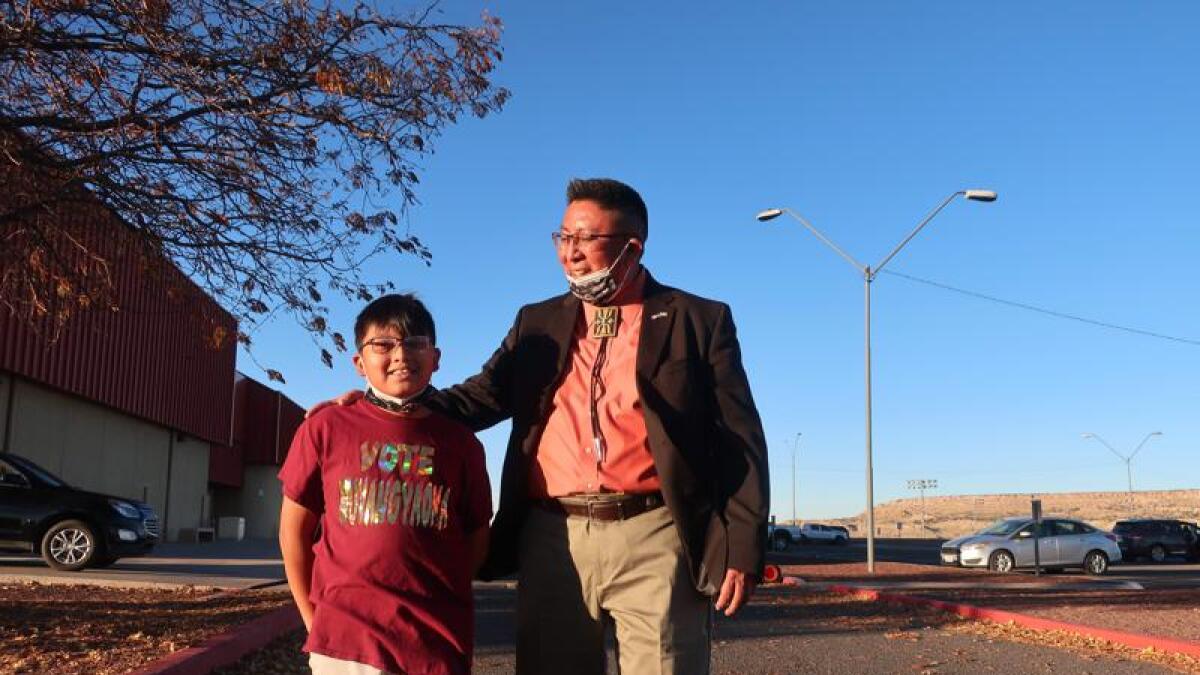 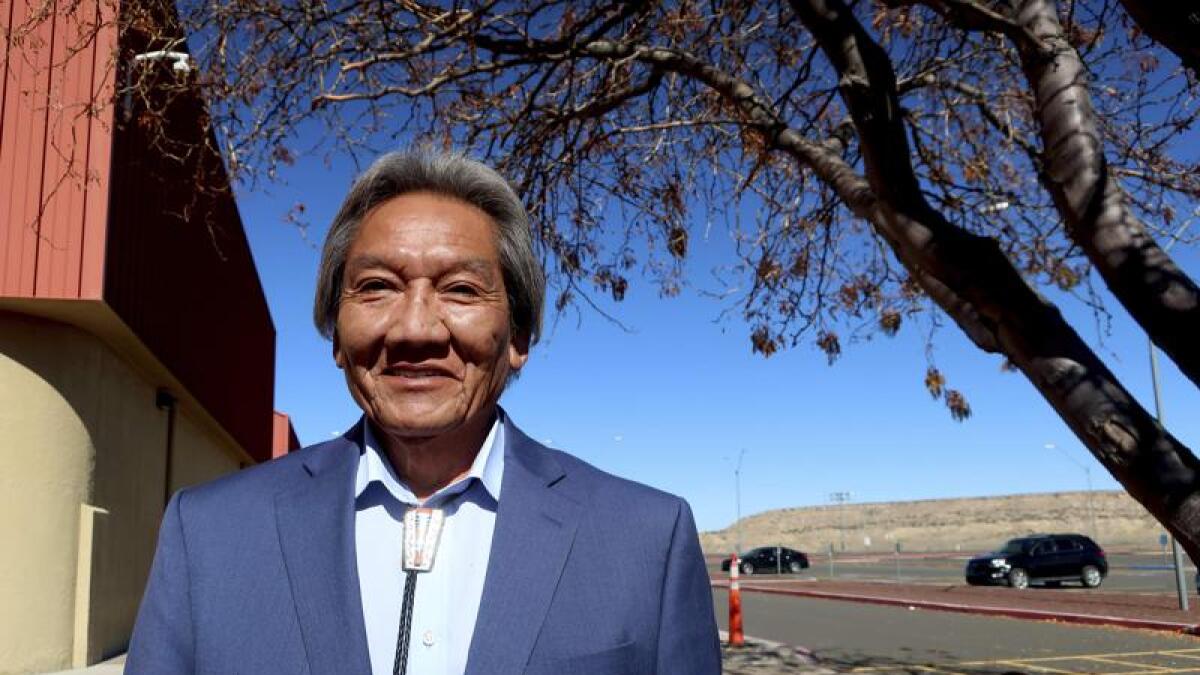 A campaign sign for David Talayumptewa sits along the freeway through the Hopi Reservation in northeastern Arizona on Saturday November 6, 2021. Hopi voters choose their next president in an election on Thursday 11 November 2021 (AP Photo / Felicia Fonseca) 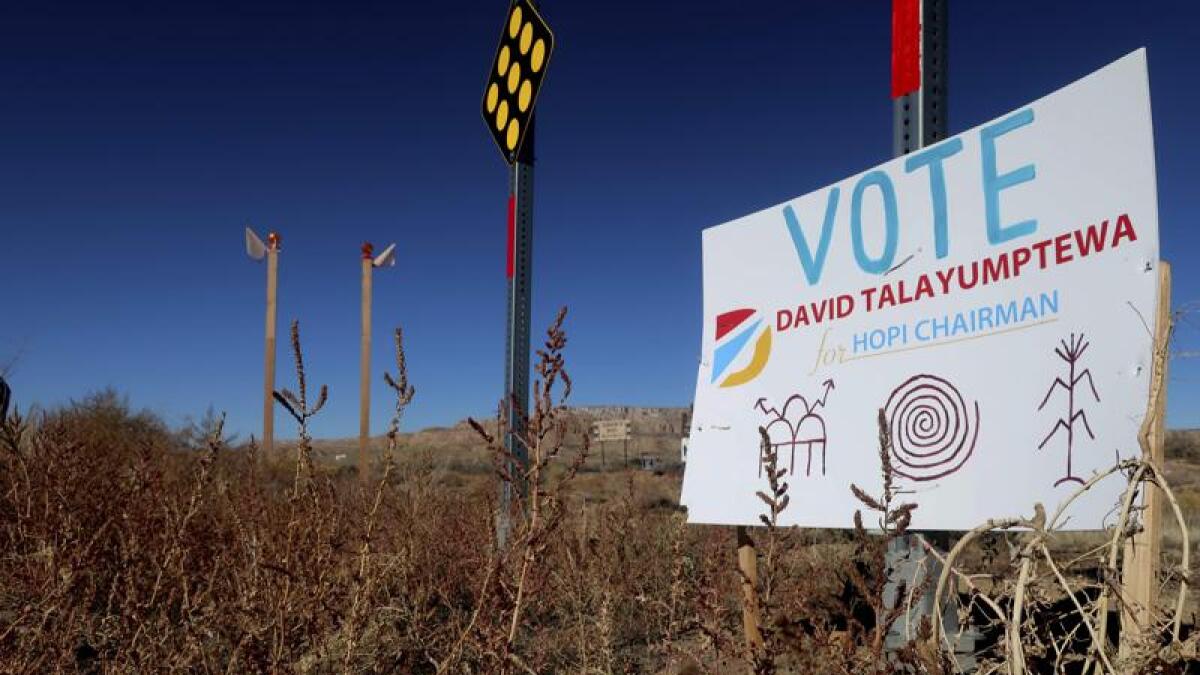 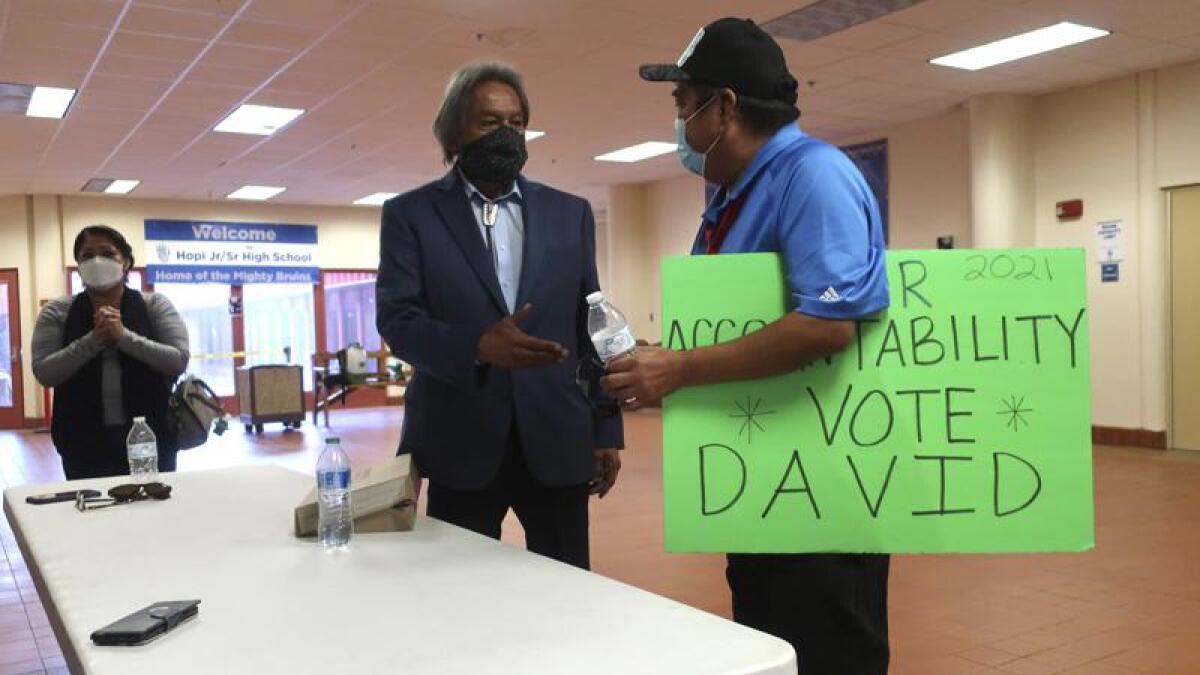 Hopi President Tim Nuvangyaoma, running for reelection, stands by the fence of the tribe’s high school in Polacca, Ariz. On Saturday, November 6, 2021. Hopi voters choose their next president in an election on Thursday November 6. November 11, 2021 (AP Photo / Felicia Fonseca) 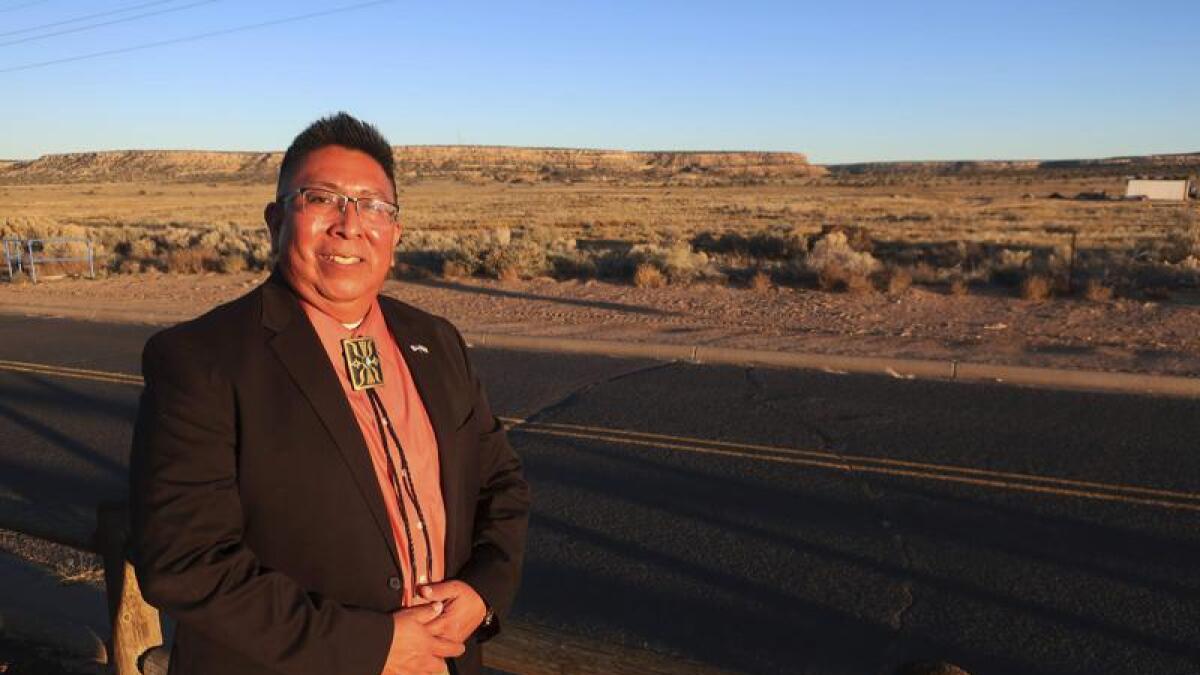 Campaign materials for Hopi president Tim Nuvangyaoma, who is running for re-election, sits on a table at the tribe’s high school in Polacca, Ariz. On Saturday, November 6, 2021. Hopi voters choose their next president at the event. an election Thursday, Nov. 11, 2021. (AP Photo / Felicia Fonseca) 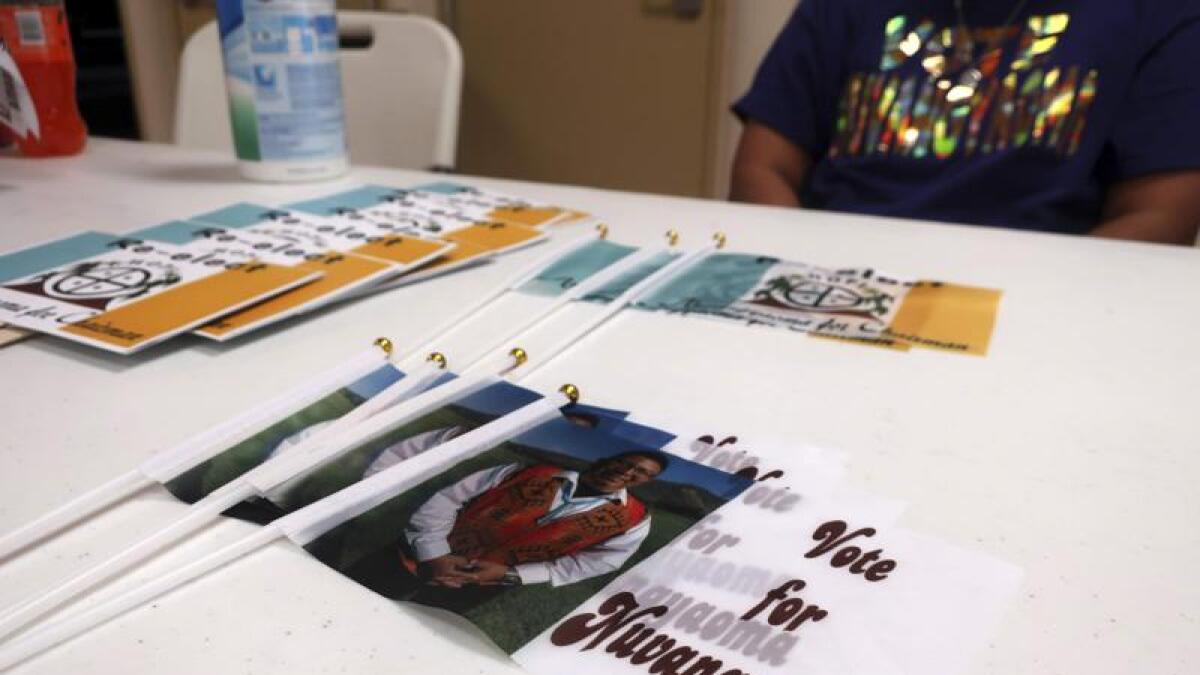 Hopi President Tim Nuvangyaoma addresses an audience gathered for a candidate debate at the Tribe’s High School in Polacca, Ariz. On Saturday, November 6, 2021. Nuvangyaoma takes on David Talayumptewa, seated on stage, in the election of the Thursday 6 November. November 11, 2021 (AP Photo / Felicia Fonseca) 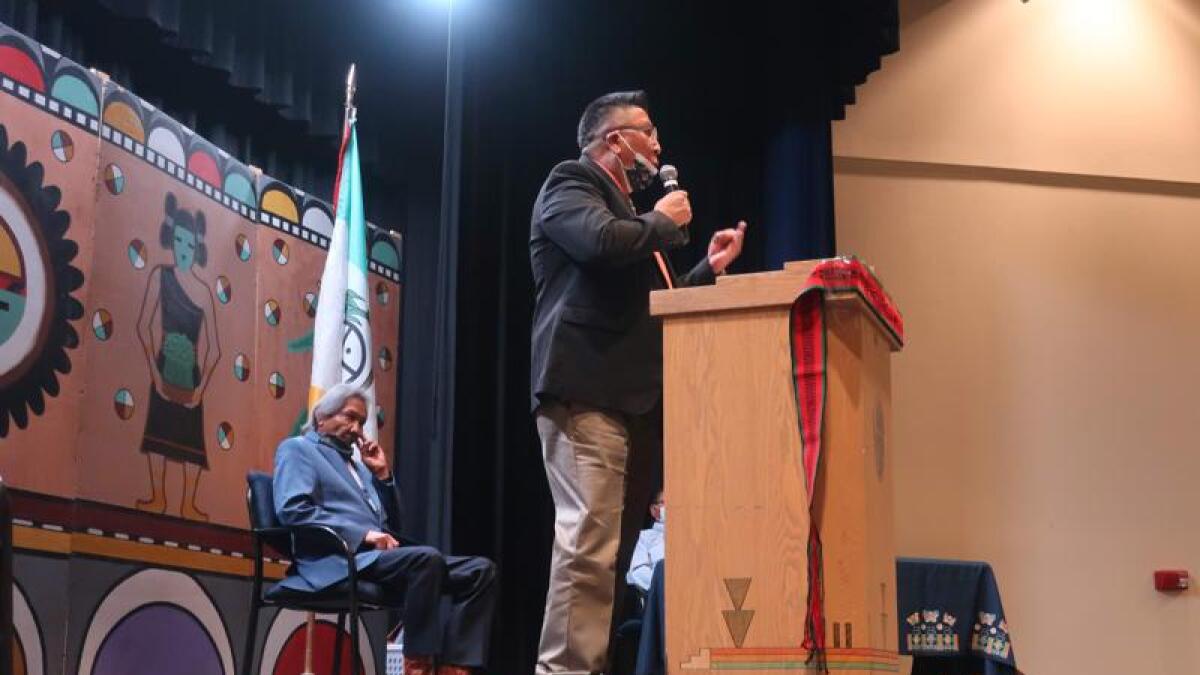 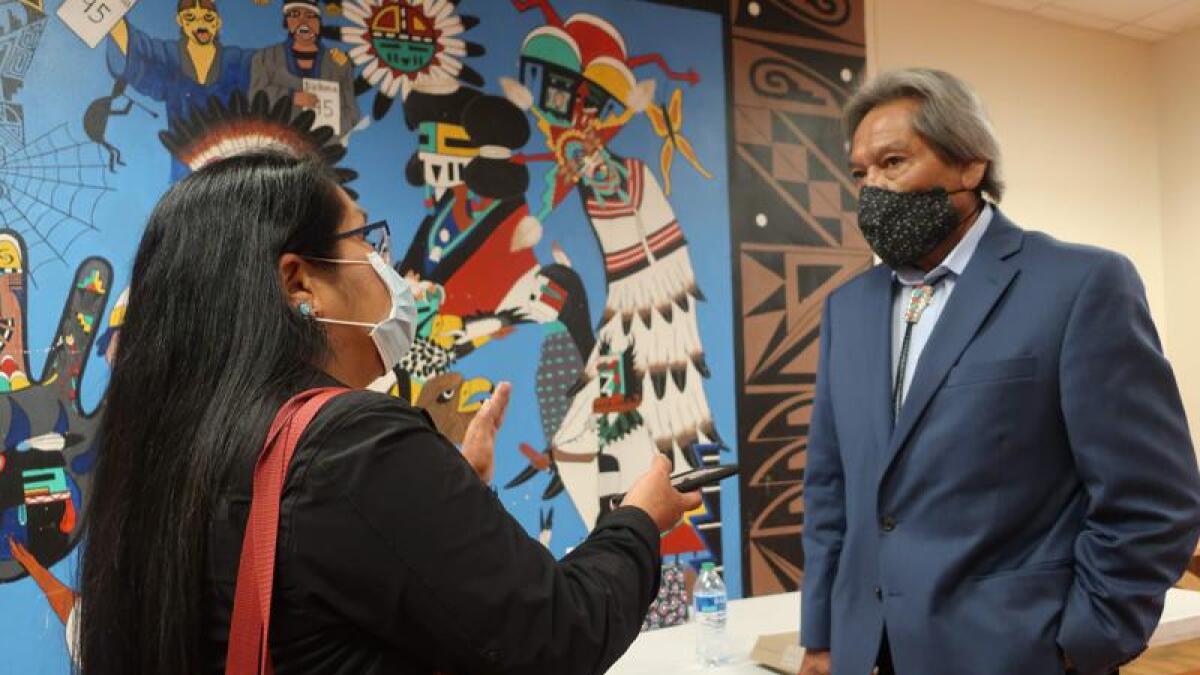 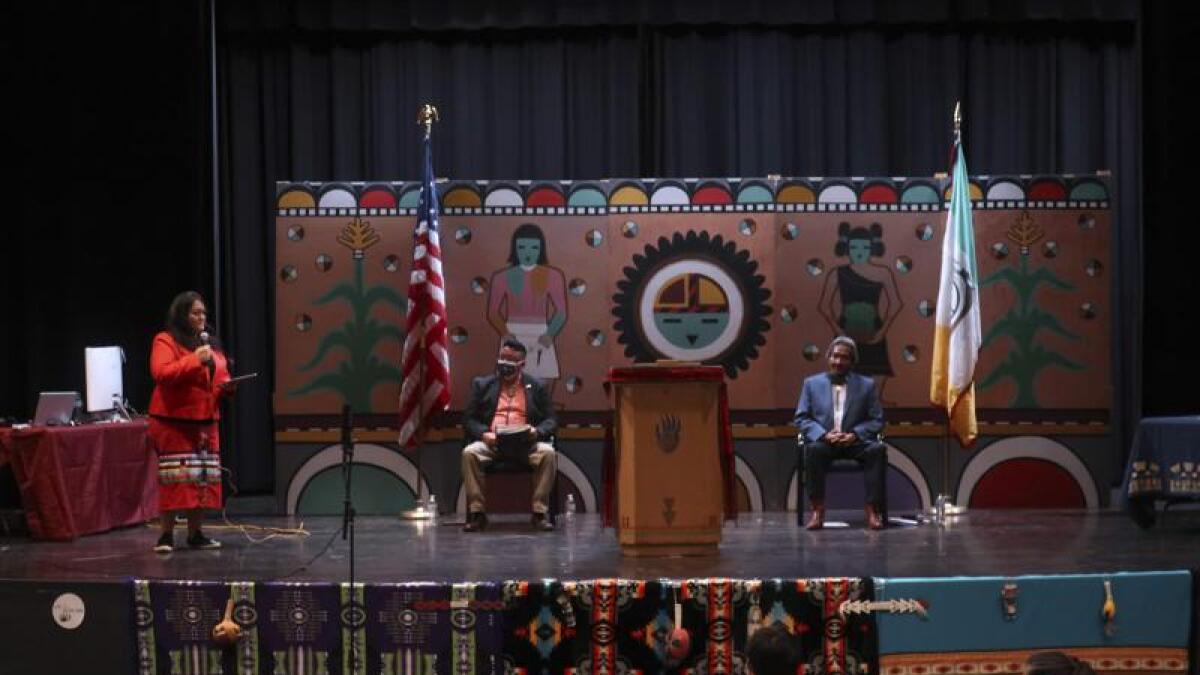